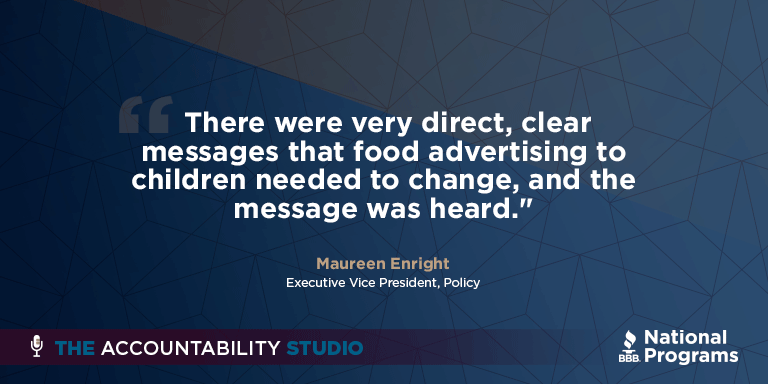 The inaugural episode of The Accountability Studio features a conversation led by Mary Engle, Executive Vice President of Policy, who initiates a food for thought with a fundamental question to the leadership of BBB National Programs: Does independent, industry self-regulation really work?

Mary kicks us off by helping us understand what self-regulation is and highlights the top characteristics of the space. She explains that at its most basic level, self-regulation is when businesses choose to hold themselves accountable to standards of conduct without the need for government action or with minimal government involvement. Mary lists three trademarks of self-regulation:

Mary clarifies the form of self-regulation discussed in this episode. The panel focuses on independent industry self-regulation, where a third party is enforcing the codes of conduct agreed to by the businesses being regulated.

Laura begins by explaining the history of the National Advertising Division (NAD) and the program’s purpose. NAD launched in 1971 as a response to consumer advocacy groups demanding regulation of misleading advertising. The outcry began with the growth of new media as this was an era where television extended the reach of advertising. NAD resulted from the industry coming together to uphold legal advertising standards, fueling trust in advertising.

The Children Advertising Review Unit (CARU) form a few years later, in 1974. Dona shared that the program was a response to the unrest of grassroots organizations requiring government restrictions on advertising to children. The advertising industry collaborated and responded by creating CARU. It was understood by the industry that there was a need to pay specific attention to the sensitivity surrounding children who are still developing the cognitive capacity to comprehend what they are viewing.

CARU protects children from deceptive or inappropriate advertising and ensures children’s data is collected and handled responsibly in an online environment.

Maureen detailed the unique difference of the Children’s Food and Beverages Advertising Initiative (CFBAI). The program resulted as a solution to address childhood obesity growth in the U.S. by not only regulating how foods are advertised to kids but also what foods are advertised to them. The Federal Trade Commission’s (FTC) chairman, the secretary of the Department of Health and Human Services, and the Institute of Medicine were all calling for regulation, and it became evident to the food and advertising industries that changes were needed.

The next steps were CFBAI, a program where participants pledge to advertise certain foods to children or opt not to advertise food to them at all.

Peter brings years of experience and wealth of knowledge to the youngest of the programs, the Direct Selling Self-Regulatory Council (DSSRC). The program launched in 2019 when Truth in Advertising (TINA) produced a report about the need for consumer protection in the direct selling space, and soon after, former Commissioner of the FTC Maureen Ohlhausen addressed the Direct Selling Association (DSA) on the same issue. It was hard to deny the need for regulatory support in the industry. DSSRC had three objectives:

Mary leads the conversation further, allowing the panelists to discuss how each of their self-regulation programs works, presenting the various formats and structures these programs can take on. They move into a vital discussion point among the program leads, which centers on how self-regulation benefits regulators, governments, and state attorney generals. The panelists wrap up by highlighting what the future may hold for their programs.

A commonality blares through when the panelists shared thoughts on future directives. When an industry consistently begins to hear the need for more oversight, more regulation, more action, and more consumer protection, self-regulation might be the answer. When government regulation can’t keep up, the collaborative self-regulatory space is designed to bring the industry together to respond quickly to large-scale distrust or a call for change.